PS Swingband plays swing music that has its feel deeply buried in the 30’s way of playing and with the mood and entertainment that belonged to that time.

The music is based on manouche, ie. a kind of gypsy jazz characterized by Django Rheinhardt and Stéphane Grappelli's orchestra Quintte de Hot Club de France, but moves over Svend Asmussen's repertoire and uses merrily loose of the music from the 30s and 40s.

The orchestra emphasizes the close interplay - loyalty to the good melodies and playful solos performed by Kim Mouritzen on guitar and Esben Kjær on violin.

PS Swingband is a much sought after stringswing orchestra. They have played everywhere in Denmark, Norway, Sweden, Germany and the Netherlands, and everywhere they have managed to create their very own atmosphere with their mood and joy of playing.

Many of the songs have songs in single or polyphonic versions that help to provide a varied concert experience. When the music starts, you can immediately feel the rhythmic dynamics that characterize the music, no matter how fast or slow it is played. The experienced bassist Torben Nickelsen and the experienced guitarist Per Sørensen have for many years developed their ensemble, so that it forms a musical platform for the soloists Esben Kjær (violin) and Kim Mouritzens (guitar), teasing, surprising and dynamic in solos and ensembles.

PS Swingband largely manages to get their infectious playing joy, spontaneous whims and mutual dynamics beyond the stage edge. 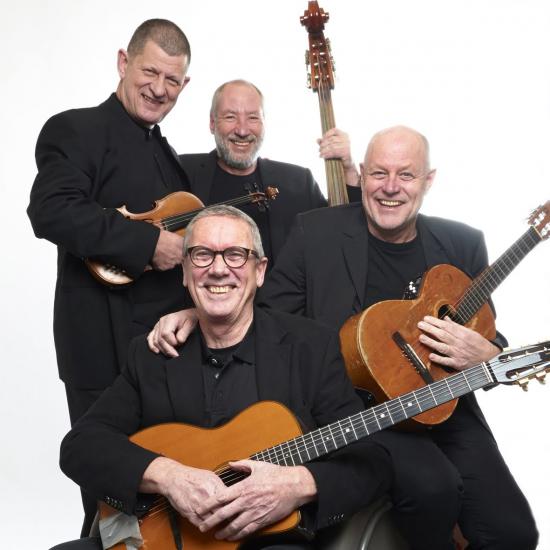