Four On Six Band Band is from Milan. The pretty young men in the mood-spreading orchestra started playing together in 2010, and are now well known in Italy. They have also played at several clubs and festivals in i.a. South Korea, Japan, France, Belgium, Spain, Switzerland, England and Sweden, and now also Denmark. The quintet has recorded several albums and produced a number of music videos. The musical recipe is melodic swing jazz mixed with elements of classical and folk, heavily spiced with explosive gypsy tones. The music is direct, varied and festive - it can be hard to sit still when the Italian music chefs fire up the pot. With impressive and virtuoso reach, Four On Six creates great smiles and good mood wherever they perform. 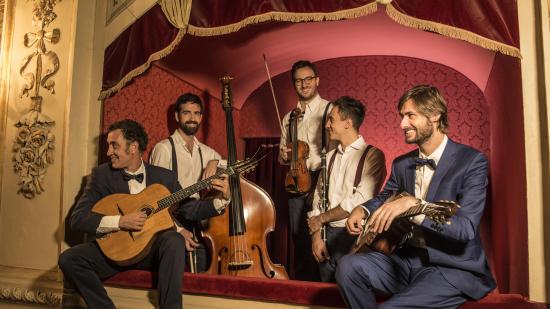